After a week off, we had a busy weekend in the garden. A late frost damaged a few plants so I added some additional tomato and pepper plants. I only pulled up two of the worst tomatoes and left the others. The new growth looked like it might recover. The damaged peppers also had some leaf buds that looked like they were still viable. 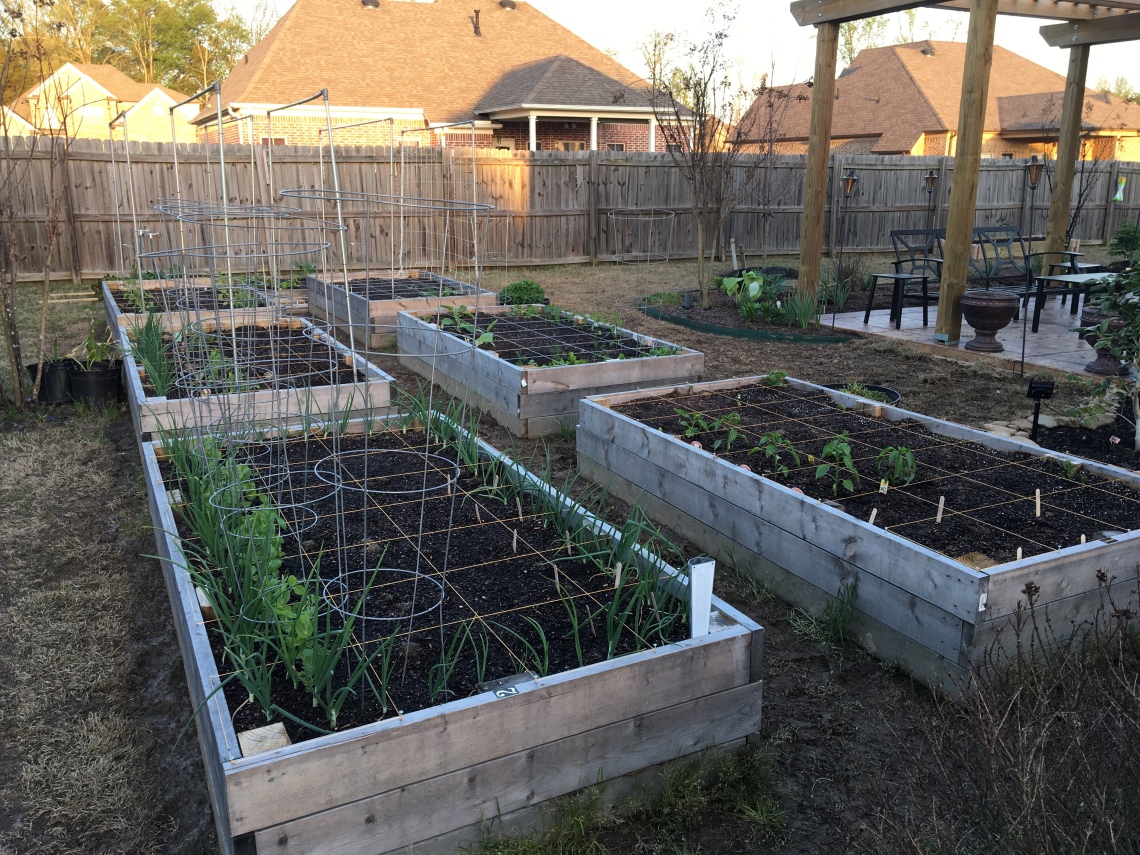 This year, Bed 1 has carrots, potatoes, peppers, orach, and a tomato. The potatoes are growing very nicely but they are not nearly as large as the ones I am growing in grow bags. I am not happy with the orach and will probably not grow it again. I have had poor success with germination. The carrots are germinating and I see a few that are getting their first true leaves. The carrots I have in a pot are about 4″ tall now and are growing nicely.

Bed 2 has beans, peas, and I kind right now. Everything is doing well and I used some of the onions last night. The peas are about 12″-14″ tall and are growing up the supports. I hope they will produce before it gets too hot. Almost all of the bush beans have germinated. I have a few empty squares and I will seed them this coming weekend.

Bed 4 has tomatoes, arugula, and cucamelons. This is my first effort at growing cucamelons and in chose them just to see what they were like. I noticed that they had germinated and should have their first true leaves in a few days. I had just sowed the arugula before we left for vacation and it has sprouted nicely. Bed 5 has cucumbers, tomatoes , and dill. I have had almost 100% germination rate with the cucumbers inspire of using some old seed. Bed 6 is tomatoes and basil. I am not sure about the basil and I may not grow it again in the future. Bed 7 has leafy greens- lettuce, chard, spinach, collards, and a couple of mustards. I cut enough lettuce for a salad Saturday night and enough of the other greens to make hortopita on Sunday night. There is plenty of lettuce ready so we are set for salads for the rest of the spring. We got the twine in place for the tomato supports. I am planning to train the indeterminate tomatoes as a vine and prune all of the suckers. This will be some extra work but I am hoping I will have a better crop less-crowded beds this year. I am using plastic clips that I bought from Johnny’s and nylon twine from the hardware store. The main supports are the electrical conduit that we bought 3 years ago. 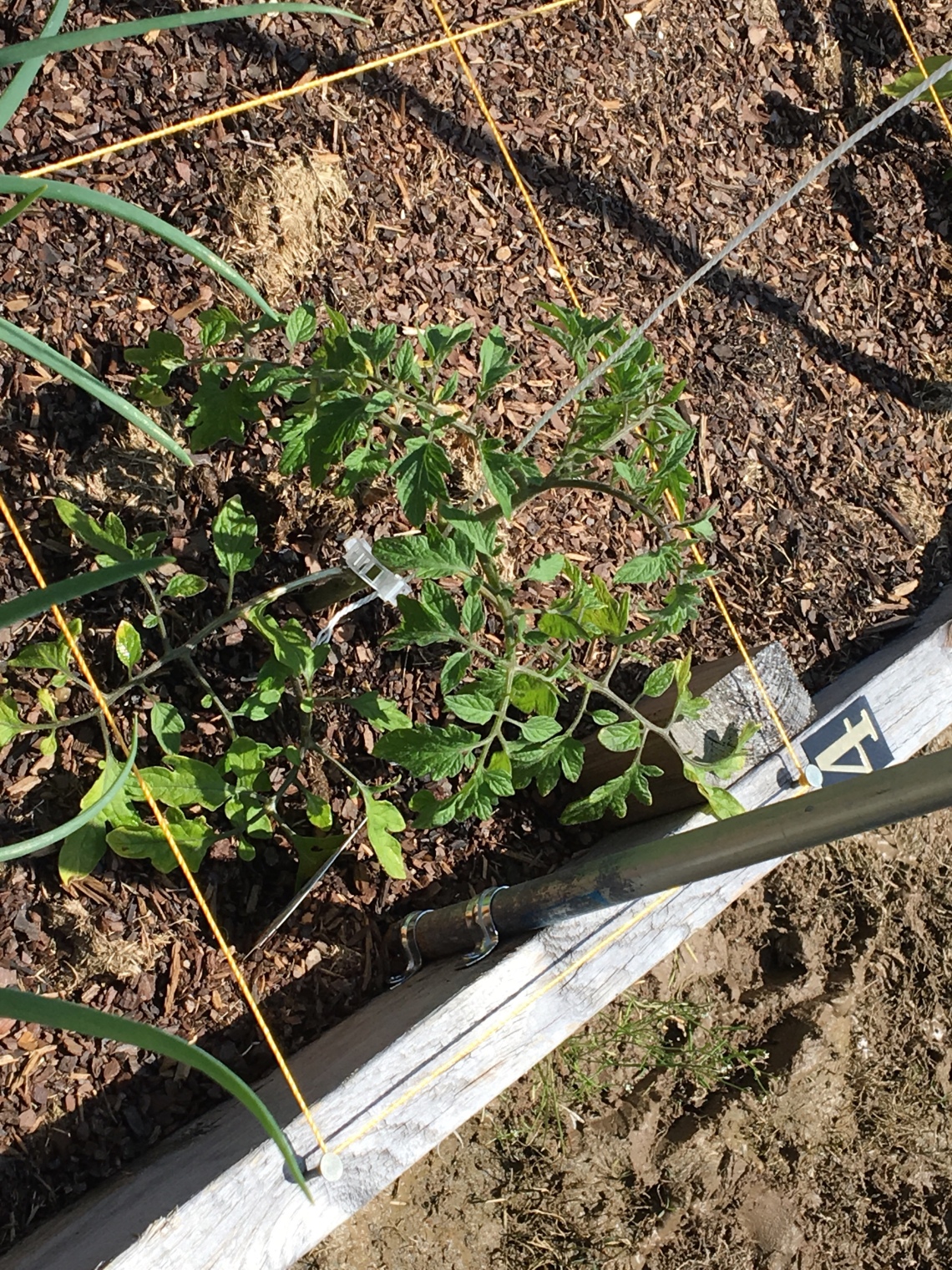 This year, also, we are attempting to grow winter squash vertically. So we bought some 4×8 handy panels and some T-posts from Tractor Supply and made a quite sturdy trellis. We will train the vines up the trellis and support the heavier squash with slings made from old t-shirts. 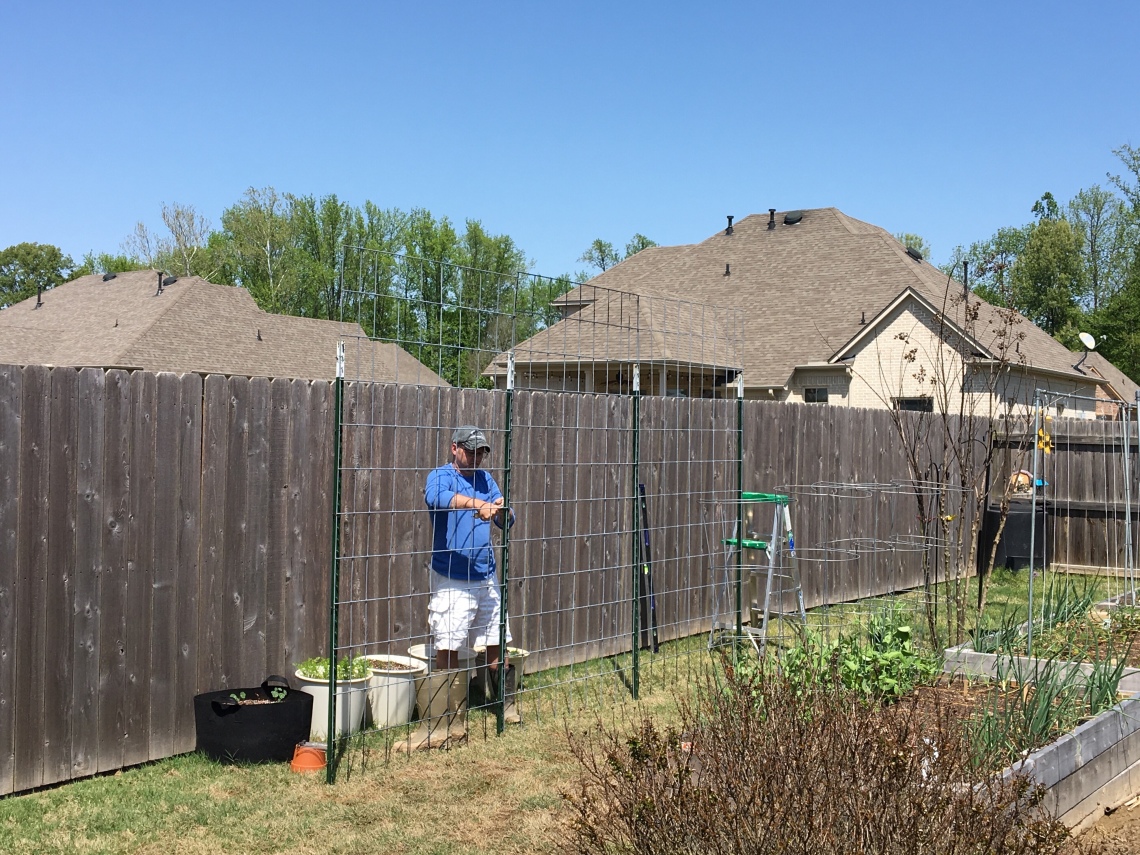 I got some spaghetti squash, butternut squash, zucchini and yellow straight-neck planted in grow bags. I will cover them with row covers until they start to flower in an effort to fight squash bugs and vine borers. I applied Garden-tone and Tomato-tone to all of the beds and worked it in. It’s spring and in spite of the last few cooler nights, it’s time to start growing!